Last week we were learning all about weight. In the infant classes we don't learn about grams and kilos we discuss weight in non-standard units so when the children asked me how much do I weigh I told them 20,000 teddy bears!!!

Initially we discussed two items and which ones were heavier like a car and a pillow or an elephant and a pencil. When the children understood this the weighing scales was introduced. 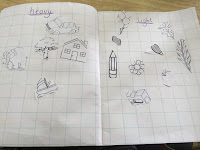 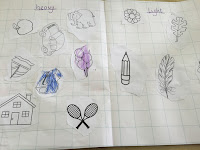 Day 2:
v How does an objects size impact on its weight?
v Does bigger always mean heavier?
The children looked at two items and decided which was bigger (a beach ball and a marble). We discussed this and the children all decided that the beach ball looked heavier but the marble was really the heaviest. 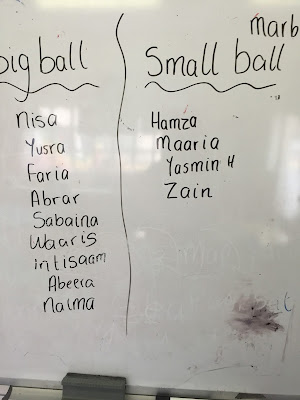 Day 3:
v Which objects in your basket weigh the most?


v What item is the heaviest overall? 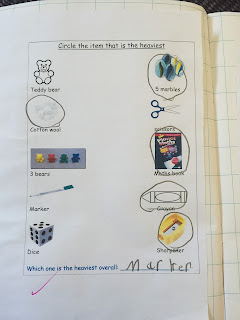 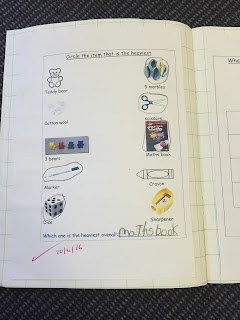 
v What items weigh the same as a rubber?

Day 4 is more practise with the weighing scales. each group was given a rubber and they have to see what combinations of items they can get to balance the rubber. They then had to make a note of the items that caused it to balance. 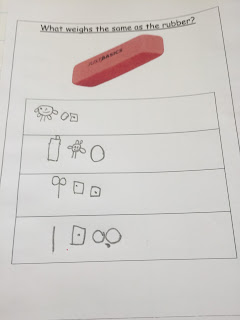 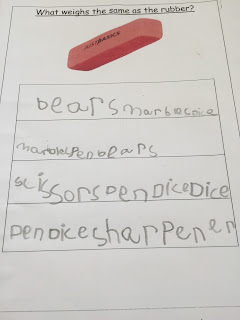 Day 5:
v How many bears will it take to balance the item?

This really challenged the children as it worked a lot on their problem solving skills. Instead of comparing which one was heavier or lighter they had to make the two sides balance. They were using non-standard units so it had to be as close as possible because sometimes it was too much and some times it just wasn't enough.

Overall we did a lot of work with weighing and weight :)
Posted by Shaheeda Zainab Independent Muslim School at 10:18 No comments: